How to enroll in MDM with Apple Configurator

What is Apple Configurator?

The range of configuration options in Configurator is extensive. Administrators can control minimum security requirements for passcodes, VPN configurations, on-device certificates, and even fonts. Generally, any configurations that can be applied via mobile device management (MDM) are also available in Apple Configurator.

Additionally, Apple Configurator provides the ability for an administrator to select which apps to install to iOS. Sign in with an Apple ID and select any app downloaded or purchased previously under that Apple ID.

How does it work?

Apple Configurator combines these two capabilities to create a blueprint:

An administrator is able to create multiple blueprints. Common groupings include role-based (executive, manager, contributor) or department-based (sales, marketing, support). Blueprints can also be layered on a device, allowing multiple configurations to overlap.

With blueprints configured, place Apple Configurator in ‘prepare’ mode.  Then, each iOS device connects via USB or lightning and Apple Configurator pushes the configuration to the device. Also during this time, administrators can wipe devices, upgrade iOS, place into supervision mode, enroll with an MDM, etc.

The process can be time-consuming if one’s upgrading iOS or switching to supervised mode (which requires a system wipe). In these cases, we find many administrators use high-capacity USB hubs. Though we haven’t used it personally, the Cambrionix PowerPad15 is an example of a USB hub for this very purpose.

Why use both configurator and MDM?

After explaining the functionality of Apple Configurator, an often asked question is: So why do I need MDM if I can manage configurations and apps this way? The question is a fair one, and the answer largely depends upon your organizational needs.

Apple Configurator can provide parity with MDM for some organizations with limited requirements. The big difference is the ability to control configurations after deployment. With Configurator, once an administrator unplugs the device, no further communication occurs unless the device plugs back into a computer. With MDM, administrators control configurations via WIFI or cellular connection.

If you’re interested in how MDM can be used to simplify app deployment, we strongly recommend this read: Install Apps Remotely to iPads and iPhones which provides a comprehensive view of the many ways to deploy apps, each having its own strengths.

MDM provides additional features that an administrator can enable remotely. They can lock a device, wipe its contents, and monitor app installation. MDM also allows an administrator to access advanced functionalities, like forcing a device to only display a single app. A great example is the Square point of sale system.

Organizations learn to establish a balance when using both technologies. Apple Configurator is able to make sure all devices run the latest iOS version, are supervised and have an initial WIFI network connection. MDM is then used for all further configurations and management.

How To Enroll With MDM Using Apple Configurator

Enrolling a device with MDM generally occurs via a link either sent to the device by SMS or email or manually typed into a browser. This is reasonable for only a few devices or if employees will be enrolling their own devices. It absolutely does not scale for companies with a large number of company-owned devices that need to be set up. Instead, an organization will generally use the Apple Device Enrollment Program to have devices automatically configured with their MDM out-of-the-box, or they’ll use Apple Configurator.

Once the application is running, plug your device into the computer.

Next, click the ‘Prepare’ button from the top bar of the app. 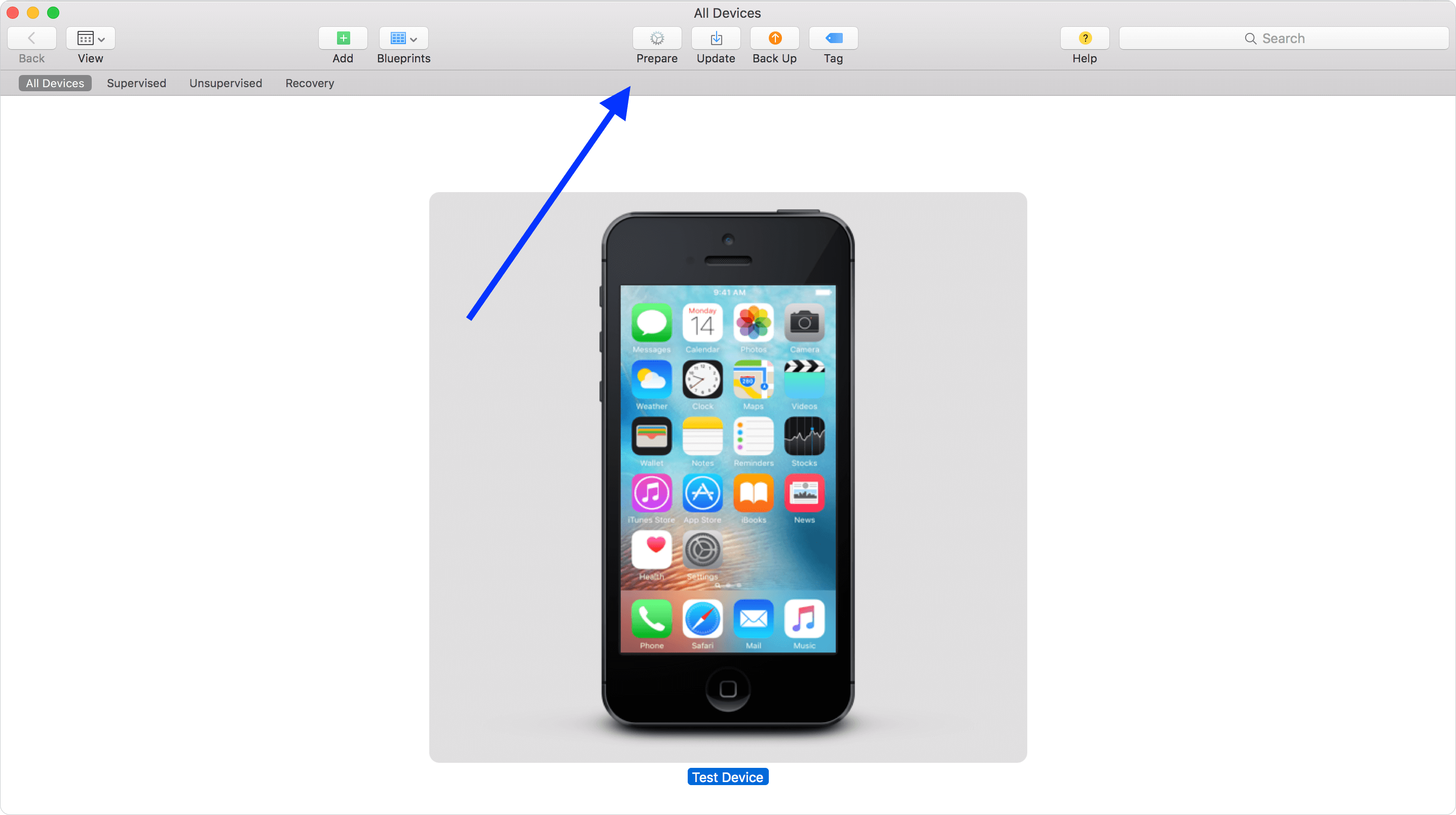 Configurator will ask you which mode you’d like to use. Select ‘Manual’ unless you have an Apple Business Manager account and want to add devices to it.

Apple Configurator will ask you if you’d like to assign the device to an MDM. Select ‘New server…’ if you haven’t completed this process before. The following screen will allow you to specify a name for your MDM as well as the enrollment URL. 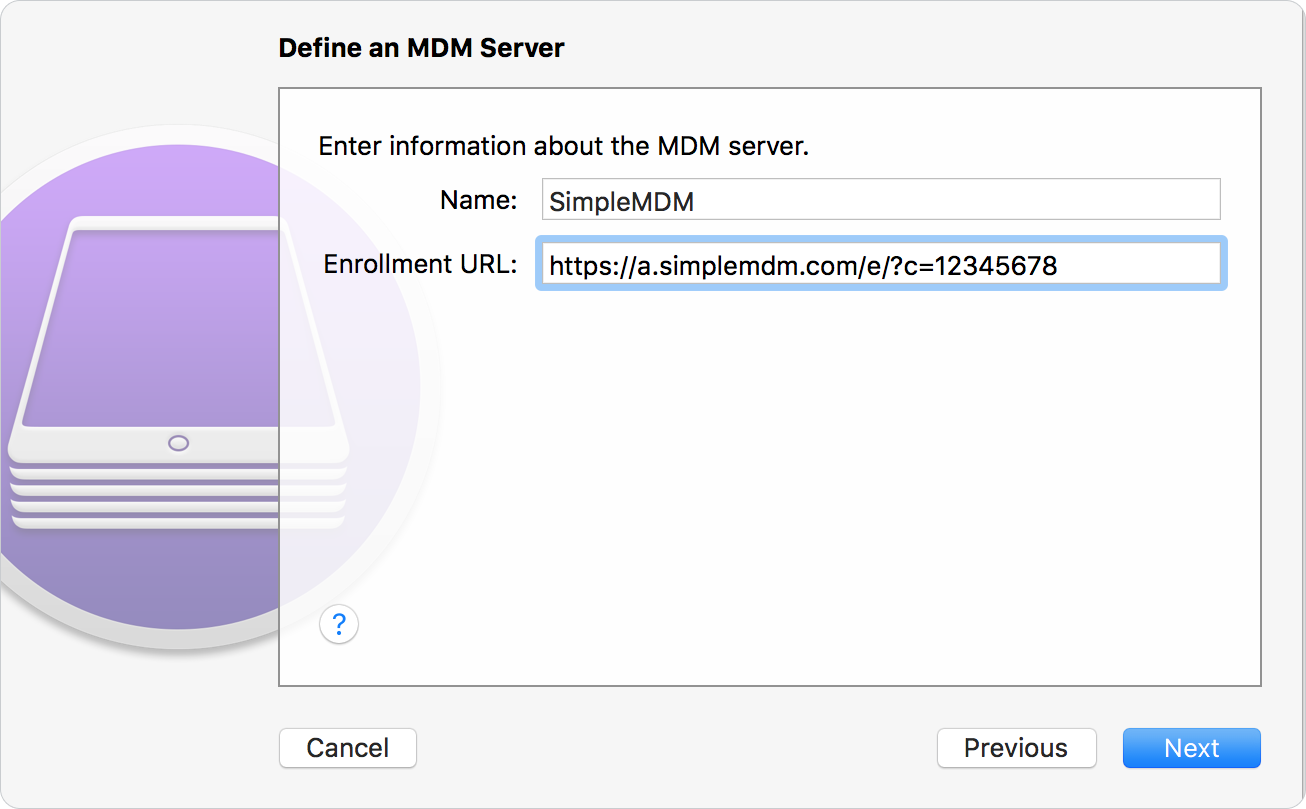 The process for getting an enrollment URL varies between MDM vendors. For SimpleMDM, you must create an Enrollment (either group or one-time) in order to generate the URL as shown below. Paste the enrollment URL into Apple Configurator. 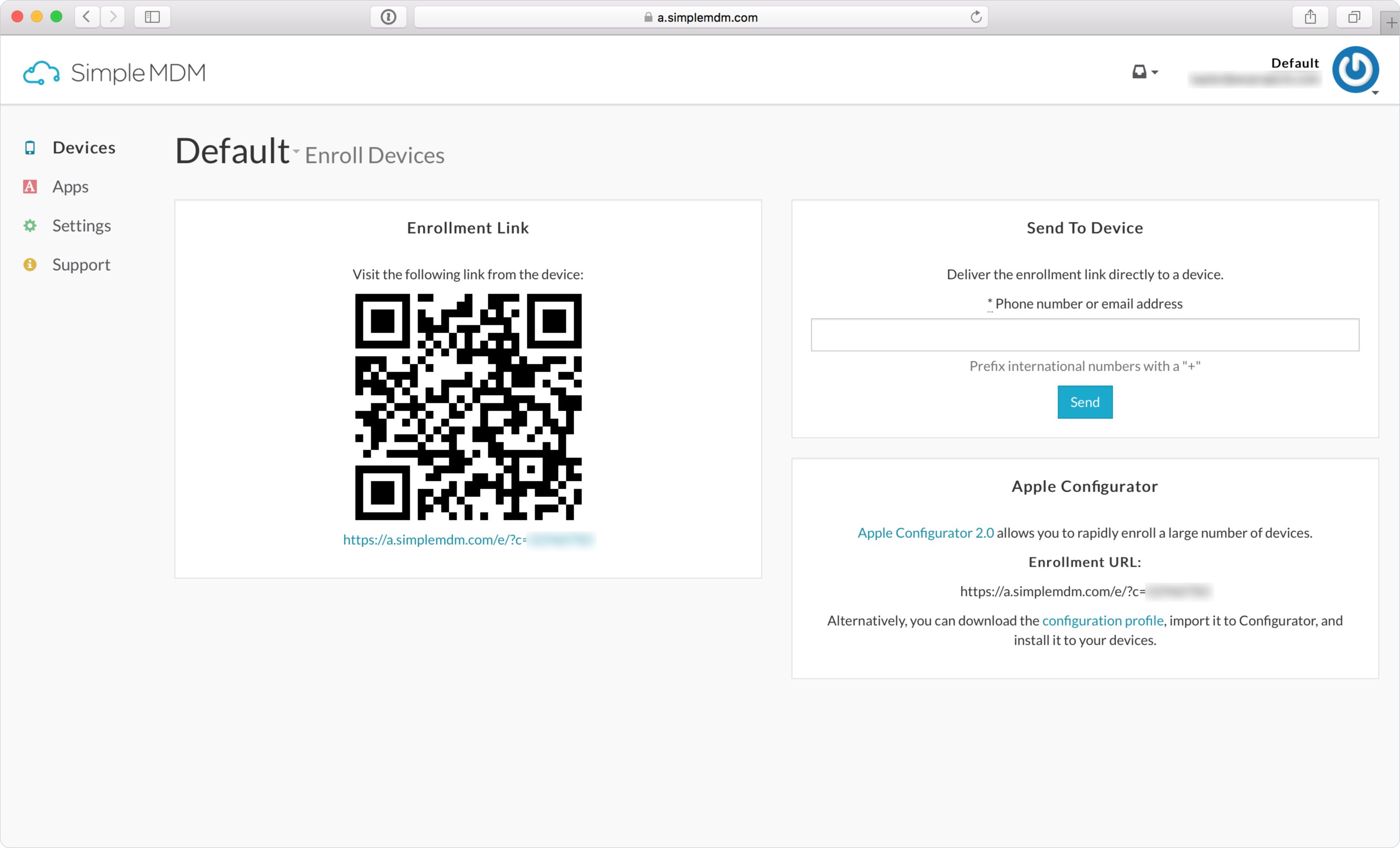 The remaining steps are not MDM-specific. The prompt asks if you’d like to:

Once you’ve completed these steps, Configurator will begin setting up the devices you selected initially or plugin subsequently. The devices appear automatically in your MDM as they configure.

We run Windows. Can I use Apple Configurator?

The strict answer is ‘no’. Apple Configurator software is only for macOS; Apple does not distribute a Windows version.

The nitty-gritty answer is ‘sort of’. None of these methods are recommended and may provide more pain than gain, so we generally recommend that organizations in this scenario purchase a Mac Mini to have as a resource for around the office. If interested in going down the rabbit hole, here are some methods that we’ve heard employed: